This document represents the intermediate Report of the EMMA Activity 2.1. It describes a collection of bottlenecks in the countries of participating organisations.

A bottleneck is described as an existing permanent obstacle for inland navigation in the partner countries. Since the inputs towards this report are researched and elaborated by the EMMA partners, some readers might miss individual bottlenecks. However the project did not aim at covering the entirety of all possible bottlenecks, but at covering everything of relevance regarding projects requirements. The requirements for this activity are set to cover all parts of all countries except for Germany: Since a coverage of the project is the Baltic Sea Region (BSR), Germany is analysed by its north eastern part: From the River Weser via the river Elbe up to the river Oder at the German-Polish Border. The named rivers run more or less in a north/south direction, in order to cover the region, all waterways between the Weser and the Oder more or less connecting these fairways in an east/west direction, are part of the research.

The research was done using a questionnaire in a table format was created, containing 28 data fields with open and multiple choice questions. This document covers the outcome of the questionnaire with accompanying information about the countries characteristics to set a context. Please find the complete questionnaire with hints but without answers in the annex of this document.

A total of 39 bottlenecks were collected in the countries Finland, named parts of Germany, Lithuania, Poland and Sweden. The number per country is very different: The most information was collected in the parts of Germany – since Germany has already a well-developed IWT system with a long tradition and history. Second highest number of bottlenecks (eleven) were identified in Poland with a rather low use of IWT, Sweden reported four bottlenecks, Finland two and Lithuania one. These different amounts can be observed when reading through the individual country information: for Sweden, Finland and Lithuania each bottleneck is describes whereas for Poland and Germany a summary is given.

The terms “Inland navigation” or “inland water transport” (IWT) is used throughout this document also with respect to lake sea navigation. The sequence of countries in this report is according to alphabetical order.

Contrary to the description of EMMA Activity 2.1, costs regarding the overcome of bottlenecks are not included in this report. The research unveiled a range of cost from none to multi-million Euro investments for infrastructural enhancements. But these figures show just a part of the truth: anticipated costs would be given, but these figures might be completely different to real cost (e.g. cost initially expected and actual cost for the new airport in Berlin, BER) and furthermore, administration and lobby cost are not
determinable. Since this project is also about such aspects, absolute or relative cost would distort the reality and might impeach credibility of this project. 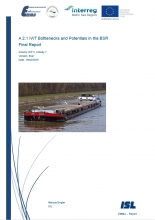