European legislation is becoming more and more important to the transport sector as it regulates future efforts and future needs following the strategy for climate change. European and national regulation can help inland navigation to develop the right way. Anyhow, not well considered implementation in national laws could also hinder market development of inland navigation.

The report on the LNG directive as a case for EMMA relevant decision making processes will show how the process on EU level has been operated and what follows in Germany and the BSR.

The European Inland Waterway regulation was formally implemented in Sweden in December 2014. With the adaption of a technical framework it was now possible to receive a type-approval in Sweden for an inland waterway vessel. Since this introduction, no ship-owner have applied for such a type approval, and the reason is that there are still barriers for IWW to be properly introduced in Sweden, caused by the national implementation. There are five regulatory areas which are significant for establishing IWW in Sweden. These are summarized in the Swedish use case: “Reducing administrative barriers for Swedish IWW” to better understand the challenges and to pave the way for future discussions on improvements.

The use case “TEN-T: A chance for the river Oder” highlights the European TEN-T and CEF instruments as a supportive tool which could be used to develop inland navigation on this important border crossing river. Pre-condition would be the nomination of river Oder to be part of the TEN-T core network. 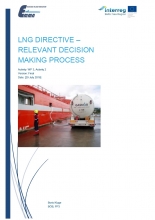