The European infrastructure policy should be considered the backbone of the common European transport policy that supports all modes of transport. As a result, the transport and infrastructure policy of the Member States should build on and reinforce the strategy developed at the European level. Only then a smooth and fully integrated European transport chain can be developed. Same applies to inland navigation and river-sea shipping, which can develop to their full potential if sufficient preconditions are set and implemented.

The overall goal should be the creation of a fully integrated European inland waterway system, which meets the demands of modern industry 4.0 applications. Consequently, this requires a viewpoint on the entire European inland waterway system and not only on single stretches such as the Rhine or the Danube waterways. Different waterway classes for navigation are acceptable, if their status does not exclude maintenance and modernisation measures nor underrepresentation in investment plans.

Inland navigation and river-sea shipping will hardly develop further without the political willingness and support to create same terms and care for all transport modes. The integration of more environmentally friendly transport modes in the logistics chains will help to achieve the goals set by the European Union in Paris or in strategies such as the Europe 2020.

The policy paper provides inspiration and contributes to discussions of policy bodies in the European Union and its Member States in charge of inland navigation and multimodal transport policies.

The paper is supported and co-authored by: 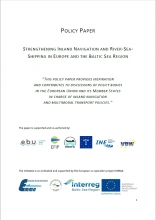