The EMMA Project is funded by the INTERREG V B Baltic Sea Region Programme. The region covered (BSR) is characterized by growing transport volumes especially between East and West. Road and rail infrastructure needs innovative and pragmatic solutions to cope with future requirements on transport facilities. Rivers, canals, lakes and also the Baltic Sea have huge capacity reserves, whereas in some parts of the BSR road and rail infrastructure is already overloaded.
Inland Waterway and River-Sea Shipping (IWT) still do not play an adequate role in the transport system compared to its possibilities. Too often, inland shipping is not even considered as transport alter native by many forwarders and stakeholders in the transport sector, even though of its benefits. The question that needs to be answered is how the modal share of IWT can be increased in the Baltic Sea Region countries.
This leads to EMMA’s main objectives being:

This document serves mainly as a global overview enabling readers to get information what to do in general when trying to gain inormation about enhancing comprtetivenenss of the own business. The CIP does not recite each and every aspect of the project nor its reports, it rather collects and concentrates upon the most vital conclusions and references and indicates where to find more detailed information.
The document reflects the general project’s layout: Information is collected per participating country (Finland, Germany, Lithuania, Poland, Sweden) and for cross border transports to set a common scene. It starts with a country’s information on responsibility structures and recommendations for more efficient structures. Then today’s existing lobby structures are discussed as far as relevant for the EMMA project partners. Further on, pilot activities were preformed and briefly reported here to demonstrate IWT potentials. Moreover, current or upcoming issues were collected and briefly described.
The discussion of each country and Baltic Sea Region follows the following track: at the beginning the current responsibility structures in administrations are named, then recommendations for improved structures taking IWT development into consideration are suggested, today’s existing lobby structures are named. After that, chosen EMMA pilot activities are presented, some possibly upcoming bottlenecks are shown and conclusions are drawn. Since the single countries are independant states but Germany a federation with states, the structures are generally not comparable. For further information please refer to the appropriate EMMA report.
The sequence of countries in this report is according to alphabetical order.
Contrary to the description of parts of EMMA Activities, costs regarding e.g. the overcome of bottlenecks are not included in this report as the description reads. The research unveiled a range of cost to realise different measures from none to multi-million Euro investments for e.g. infrastructural enhancements. But these figures show just a part of the truth: anticipated costs would be given, but these figures might be completely different to real cost. Further social benefits might not be reflected propably in just presenting costs for building infrastructutre. Finally, administration and lobby cost are not determinable. Since this project is also about such aspects, absolute or relative cost would distort the reality and might impeach credibility of this project. 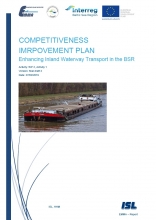