The counties around Lake Mälaren, more specific the counties of Stockholm, Uppsala, Västmanland and Södermanland, together constitute the region of Mälaren Valley (Mälardalen). The region is shown in Figure 1, visualized by the green rectangle. This region is the largest in Sweden with approximately 3.2 million inhabitants, equivalent to above 30 per cent of the Swedish population. It is also one of the fastest growing regions in Sweden.
The Mälaren Valley region will over the coming years face a number of changes to its infrastructure network with the construction of the Stockholm Bypass, the relocation of the main container port to Norvik as well as the closure of at least one of the major fuel depots that serves the region.

As a part of the INTERREG Baltic Sea Region project “EMMA”, M4Traffic has been given the task to investigate certain goods flows in the Mälaren Valley to find whether it is possible to use Inland Waterway (IWW) as a part of the transport chain.
In collaboration with the client, three such flows were identified;
• Return-packaging
o Paper, glass, newspaper, metal and plastic
o Aluminium cans and PET-bottle
• Household waste
• Sand and gravel as well as snow cleared from the streets during winter.
During discussions with representatives from the municipality in Stockholm as well as local businesses, it was understood that a large part of all sand and gravel transports already use waterborne transport. The potential for using IWW for the remaining part of the flows were considered low, hence these flows have not been further investigated.
During winter time, snow needs to be cleared off the streets of Stockholm. Due to lack of space for dumping the snow (as in all larger cities), the water (Riddarfjärden) in and around the Stockholm city centre is used for dumping snow. This procedure has been criticised as the snow looks dirty and pollution from the road traffic therefore affects/pollutes the water. Especially there has been a concern regarding contaminated particles. One alternative instead of dumping the snow straight into the water, is to dump it on a barge, either to be transported out of the city centre, or to be cleaned on site and then let out into the water. One positive effect from the last alternative could be recycling of the gravel that is spread out on the streets. As it is now, this gravel is just dumped along with the snow in the water. In Oslo, this solution is already in use with the barge NCC has constructed, with positive results. Besides cleaning the snow, the solution also reduces the truck mileage as the barge can be places in the very city centre.
In conversations with representatives for the city of Stockholm, it was though understood that the snow cleared from the city streets during the winter does not impact the pollution levels in the water in and around Stockholm and therefor does not need to be transported to other locations. As a result of these talks, also these flows have not been further investigated.
Regarding household waste, a well-developed local network is already in place regarding this, and with an infrastructure adapted to road transport. A large share of the households in Stockholm are heated with district/central heating, which in turn in general use bio fuel, gas, oil and household waste as different fuels. Only a few of these heating/power plants are suitable located by the water, as the newly opened plant in Hjorthagen. At the same time, this heating plant does not primarily use household waste as fuel, but different kinds of bio fuel transported to the plant via shipping, train or trucks. In general, the heating plants that use household waste as energy source are located inland, as for example the plant located in Högdalen. As this market was considered mature and well adapted to road based transport as well as individual flows of household waste are small, these flows have not been further investigated.
Regarding the flows of return packaging, these were more complex, and it was also understood that smaller flows were consolidated at a few locations around the Stockholm county, and then transported to larger national recycling centres.
Therefore, this report will be focusing on return packaging, more specifically general household packages and newspapers (FTIAB) and aluminium cans and plastic bottles (Returpack).
In addition, a short survey of existing academic literature was conducted to give some supplementary context, as well as a brief cost benefit analysis in order to compare costs related to different transport systems. 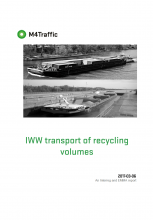