Lithuania has rather short navigable inland waterways and a few inland ports. Rail and road transport play a greater role for the industry than IWT. There are 877,1 km of inland waterways of national importance of the Republic of Lithuania, 429,7 km of them are being operated. The navigation period is 199 days from 16th of April to 31st of October.
Main IWT waterway is river Nemunas and Curonian lagoon from Kaunas to Klaipeda. Republic of Lithuania signed European Agreement on Main Inland Waterways of International importance (AGN agreement), according which inland waterways of international importance E41 (the length – 291.2 km) All navigation period along the E41 waterway there has to maintained indicators as it is defined by waterways network main standards and parameters description TRANS/SC.3/144 of the United Nations Economic Commission. For the E41 waterway section from Klaipeda to Kaunas.
The planned implementation of commercial pilots in Lithuania will showcase feasibility of IWT services in supply chains and promotes IWT to cargo owners and forwards in these emerging IWT markets.
As such the commercial pilots will directly influence framework conditions for the better development of IWT in the emerging markets in future and support the implementation of EMMA policy paper's recommendations 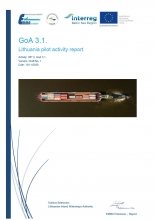