On April 6, 2021, for the first time in history the commercial transport of containers with cargo for one of the factories located in the Kujawsko-Pomorskie Region set off from the Port of Gdańsk. A barge and a pusher, after crossing the lock in Przegalina, entered the lower Vistula River and after about 15 hours of cruise reached Chełmno. On the Vistula wharf in Chełmno, on April 8, cargo was transshipped. Import containers were placed on trucks, while goods intended for export were loaded onto a barge. After 10 hours, the barge with pusher returned to the Port of Gdańsk, from where the unloaded containers were transported to sea vessels. The entire operation, during which 12 containers (approx. 300 tons of goods) were transported, took 4 days.
The pilot cruise was possible thanks to the transnational project EMMA Extension (Program INTERREG Baltic Sea Region). Project partners from Germany, Sweden, Finland, Lithuania and Poland want to highlight the benefits and advantages of water transport and mobilize managing authorities to restore inland navigation to the group of key means of transport. This trend is in line with the policy of developing a competitive and sustainable transport system, set out in the "White Paper" of the European Commission. Therefore, the main goals of the project are:

Apart from the promotion of inland navigation, cruises had one more important goal, namely the practical verification of water transport possibilities and reloading goods that go from seaports into the interior of the country, as an alternative to road or rail transport. In this case, water transport can be included in the supply chain, which in the future could run through the logistics center in the heart of the Kujawsko-Pomorskie Region - the Bydgoszcz Logistics Hub. 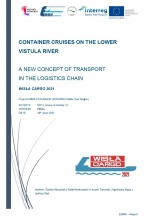