This simulation report aims to evaluate what infrastructure measurements that needs to be taken to make the inland waterways route between the Preem AB petroleum refinery in Brofjorden and the port of Gothenburg safely navigable for EU-classed inland waterway vessels.
In the freight transport strategy "Efficient, high-capacity and sustainable freight transports - The Swedish national freight transport strategy", the Government has stated that more goods should be transferred from road to rail and waterway transportation. As part of this, Avatar Logistics within the frame of the EMMA Extension Project, has together with Preem Sverige AB expressed an interest in being able to transport petroleum products from the PREEM petroleum refinery in Brofjorden to port of Karlstad in Lake Vänern. Transport should be executed with a tank vessel classified in accordance with the EU-regulations for inland navigation.
Transport with vessels classified for inland navigation is based on the Swedish Transport Agency's technical regulations for vessels in inland shipping (TSFS 2014: 96). The technical regulations are based on four different classes related to geographical zones. The zones for inland navigation are classified according to the significant wave height.

At present, only Lake Mälaren, Lake Vänern and the Göta älv river are classified for inland navigation by the Swedish Transport Agency. The EU-classed zones for inland waterway transportation are planned to be extended as shown in below map, whereof Gothenburg-Brofjorden is one of the appointed areas.

The Swedish Transport Administration, who are the holder of all Swedish infrastructure, has appointed the Swedish Maritime Administration to investigate the present conditions and what infrastructure improvements that needs to be taken to be able to offer a safe operation in the waterway section between Brofjorden and Gothenburg with cargo vessels. The Swedish Maritime Administration must also produce a rough cost indication for the measures that are needed to make the new routes navigable.
To evaluate which measures that needs to be taken and which vessel size that can operate in the inland waterway section, a preliminary fairway design and marking plan have been developed by the Maritime Administration. Before the simulation different fairway design options have been developed depending on the stretch and the size of the vessel. A draught survey has been executed by the Swedish Maritime Administration as a base for the simulation.
The fairway that has been developed follows the existing inland archway fairway as follows:
Brofjorden - Stånge Huvud - Islandsberg – Malö strömmar - Havstensfjorden - Instö ränna – Källö fjord – Dana fjord.
The areas that have been chosen to be simulated are the most critical and challenging passages at Stånge Huvud, Malö Strömmar and Instö ränna.
At Instö ränna, there is an eastern alternative where there will be a completely new fairway route down to the Sälö fjord. The western alternative is available with different stretches when crossing the mark Brandholmsrevet.
The vessels for which the fairway surfaces are dimensioned are Mts Veendam which is an EU-classed tanker vessel as an inland shipping model and the fictitious vessel M/V Höljan which is dimensioned for the future planned lock dimension in the Trollhätte canal in Göta älv. 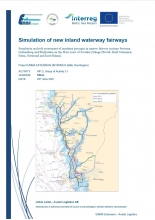