The Inland Waterway regulation was formally implemented in Sweden in December 2014. With the adaption of a technical framework it was now possible to receive a type-approval in Sweden for an inland waterway vessel. Since this introduction, no shipowner have applied for such a type approval, and the reason is that there are still barriers for IWW to be properly introduced in Sweden.
There are five regulatory areas which are significant for establishing IWW in Sweden, these are:

The case study shows that there are several important areas which was not addressed when Swedish government decided to implement European IWW into Swedish legislation. The fact that no single proposal to Swedish Transport Agency for type approval of an Inland Waterway Vessel in Swedish waters have been made, indicates that more than the adopting of a technical framework is needed for real business is started based on IWW. This has also been recognised by the Swedish government, resulting in the assignment to Swedish Maritime Administration and Swedish Transport Administration to produce a report of the potential of inland and coastal shipping in Sweden1 which was delivered in December 2016.
This project has identified five main areas which are important for enabling Swedish IWW to be running on commercial grounds. From these, the main issues from a commercial standpoint (being able to run an IWW based logistic service on commercially viable terms, competing with land-based transport), it this the infrastructure and handling fees (fairways and ports) and the possibility for pilot exemption that are seen as the biggest thresholds. These issues can be addressed by a combination of change in regulation and new regulatory frameworks This indicates that the remaining hurdles for a successful IWW in Sweden lies more on the transport agencies and administrations, but also the ports, rather than on the legislative branch of the Swedish government. The issue of internalisation of societal costs for transport, is through a far bigger question than only for IWW, and the user-funded financing model for Swedish Maritime Administration also poses a difficulty for restructuring of infrastructure fees.
At the same time, there are undergoing processes which may work in advantage to IWW in Sweden. The newly introduced technical framework for domestic Shipping, the assessment based PNF framework, can be seen as a new way of implementing regulation and enforcing the very same. With a less descriptive regulation and instead a more functional based, there are larger degrees of freedom, boht from the legislator point of view , and from the industry – in how the prescribed standards can be met. Allegedly, Sweden is the first European country that tries this approach in the transportation area, and this may very well be an area of transferability. In this analysis we propose to look at the possibility of a assessment based, functional approach also in the area of pilotage. It has also been suggested that the PNF-framework would be more suitable for Swedish IWW, than the newly implemented IWW technical framework. This since the very strict zone-regulation that relates to the technical framework, cold be solved with an assessment based approach.
Our analysis also shows that future information-based services such as SeaTraffic Management (STM) can work as a tool for creating transparency and control mechanisms, which partly can substitute strict prescriptive frameworks and regulations. From a Swedish perspective, infrastructure and technology are in place. 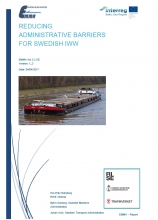