Barges are adapted for urban transport and can complement and make the domestic transport and distribution system more effective. They supply large capacity, can lift large quantities of freight from roads to waterways and contribute greatly to achieving the transport sector's environmental goals. But what is the current role of barges particularly in the Swedish domestic transport system? Read more on the article written by the EMMA Extension partner Avatar Logistics AB.

For a Swede, the association of a barge is probably something that is flat, black and that is being used in construction projects or to transport various kinds of project loads. This is how Sweden has used - and uses - barges, but within the rest of the EU, the barges have been further developed. The barges are long, low, narrow and with a low draft. You have probably seen them on the rivers down in Europe, even in cities such as Paris. But what's the point of barges? Why does Sweden need them?

It is important to point out that we are now talking about barge traffic in the domestic transport system. We are not talking about the shipping and the vessels that call our Swedish coastal ports with goods to or from other countries. That is something else: traffic with seagoing vessels, classified according to the UN body IMO's (International Maritime Organization) international regulations, and this type of shipping does not include barge traffic. The barges, on the other hand, are built and adapted to operate in inland waterways. Barges, their waterways and traffic are governed by the EU regulations. The challenges are not the open seas, but instead the traffic flows within city and regional logistics on urban, narrower waterways, rivers, canals and lakes, and their low water levels and bridges. The barges should navigate reliably inside the city, be technically safe and stable, be able to turn easily and utilize simpler quays and loading places for loading and unloading. It is this design and manoeuvrability of the barge vessels that constitute the great advantages to the barge vessels.

For all types of transport

There are barges of all sizes and for all types of transport. The differences in design respond to different loading needs and different waterways. Barge vessels for dry bulk are the most common ones, and are used for transporting for ex. raw materials, building materials, sand, gravel and grain. Some are very low, some are open, others built with separate cargo holds and hatches. Tanker barges transport fuel, chemicals and gas. They can be directly connected to terminals ashore and the cargo holds can be separate or interconnected. About 80 per cent of all dangerous cargo in the EU is transported by tanker barges, which is safer than transportation by the corresponding land transport. The roro cargo barges are built with deck for car and vehicle transport. The container barges' cargo holds are adapted to container sizes and at full load, with containers in several layers, their bridges are raised for a free view. Many bulk barges can also load containers. Container transport often forms the backbone of many smart logistics solutions, such as combined transport with one type of goods into the city centres and another out. In addition, there are both passenger barges and cruise barges.

If necessary and if the waterway permits, a barge without its own propulsion can be connected to the barge vessel, which gives a greater load capacity. Barges can also be connected and pushed forward by so-called pushers.

The mega truck of the waterways

The barges are often called mega-trucks of the waterways. They are alternatives to, above all, the truck (sometimes also the train) within regional logistics. At the same time, the truck and the barge complement each other, and together they can contribute to the cost, climate and transport-efficient transport system.

An average barge can carry as much goods as 100 trucks together (about 2,000 tons), using only one or two truck engines. Today, the modern barges are often longer and have a larger load capacity. Most are fuelled by truck fuel; the lowest Euro class is IV and the energy consumption per km / ton is about 17 percent of the corresponding land transport. Environmental requirements are constantly increasing, and upgrades are ongoing. The development towards biogas, battery, electricity or for example hydrogen, is just as strong as with the trucks.

The barges are extremely safe. They are adapted to traffic on inland waterways, sometimes dense traffic and have a better manoeuvrability than the seagoing vessels. Unlike the seagoing vessels, they are not dependent on the established port, but can also call on simpler berths, industrial quays and loading places.

A Swedish barge - but not EU-classified

Sweden has no EU-classified barges yet. There is a 50-year-old ship, MS JEHANDER 1 in Stockholm (owned by Avatar Logistics), which is technically a barge ship. Throughout her life, JEHANDER 1 has served the metropolitan area with transport of sand and gravel, corresponding to approximately 20,000 trucks on the road each year. With a simple quay and without any technique other than a conveyor belt in the bow, she unloads quickly and smoothly into HeidelbergCement's concrete factories.

CONCLUSION: Barges are adapted for urban transport and can complement and make the domestic transport and distribution system more effective. They supply large capacity, can lift large quantities of freight from roads to waterways and contribute greatly to achieving the transport sector's environmental goals.

In order for barges to benefit the domestic transport system, barges and trucks need to be treated equally. Trucks do not pay road taxes. Fairway and freight rates should therefore not apply to barges that operate inland waterways. Trucks use the land roads and the barges the waterways, both being a part of the Swedish road network. The pilotage obligation that Sweden has (written for seagoing vessels) shall not apply to high-tech barges, adapted and built to operate permanent routes on inland waterways. Here political decisions and government measures are needed.

Once these conditions and decisions are in place, barges can be picked up from Europe and put into service in Sweden - and the traffic can start right away. The barges must be taken advantage of and the opportunities they create are needed in Sweden just as in the rest of the EU.

It should be noted that smaller seagoing vessels operate in some inland waterways, for example from the Port of Södertälje in Lake Mälaren towards the Stockholm area. The difference is that the barge is fully adapted for domestic freight distribution and transportation in inner urban areas. The barge, which is independent of the established port, can create new transport flows and via the waterway reach or get near to the final recipient. 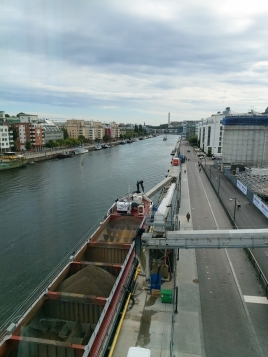