The workshop focused on the ongoing projects aimed at the development of inland waterways, ports and coastal routes, European regulations for greening of the inland fleet, innovative technologies for reducing emissions from on board engines, promotion of automated shipping and policy areas where a common approach was needed to foster innovations.

Mr. F. Harder and Mr. S. Wiech highlighted the Rhein-Ports Information System (RPIS), the electronic barge traffic system for container handling, developed in order to improve the traffic situation on the Upper Rhine
in terms of congestion, environmental pollution and facilitate the cross-border procedures between the European Union and Switzerland. RPIS was in operation in inland ports and terminals in Germany, France and Switzerland since 2015. The system allowed the interaction between the port authorities, terminal and barge operators and customs authorities to ensure planning and smooth functioning of port operations; it was demonstrated online. The speakers further addressed the role of inland ports in the digitalization of inland waterways, referred to otherprojects relevant to RPIS and stressed the need to cooperate and exchange the best practices. Currently, a new project, RPIS 4.0, was under way to expand the system to other commodities and integration with other transport modes. The speakers concluded with the key takeaways of the project, the lessons learned and factors to ensure success.

Mr. Hasu (Regional Council North Karelie and EMMA Extension project partner) started with a video about the Saimaa waterway. He described the main parameters of the waterway which is 770 km long with a draught of 4.35 m and open for navigation 300 days a year, and explained the distribution of the fairway maintenance between Finland and the Russian Federation. Recent and ongoing major infrastructure development projects
were: (a) upgrading of the locks, (b) introducing the icebreaker services, (c) new bridges and (d) re-routing of the fairway. He highlighted the structure of the freight traffic on the Saimaa as a part of industrial supply
chains, the success factors, challenges and planned measures for its improvement.

The development of the Finish waterways was foreseen in the draft Government Programme for 2019–2023, the development plan for inland water transport in Finland as well as in international projects, such as INFUTURE (with the Russian Federation) and the extension of the EMMA project.

The current situation, prospects and challenges for the development of inland navigation in Sweden were highlighted by Mr. Lantz (AVATAR Logistics, EMMA EXtension project partner). He presented an overview of Swedish inland waterways that covered the Lake Vänern,
the Göta Älv river and the Lake Mälaren, the major shipowners and the structure of the fleet operating on Swedish inland waterways. The speaker continued with the activities of Avatar Logistics AB in the sphere of inland water transport and logistics and highlighted the ongoing projects: (a) modernization of the fleet engaged in transportation of aggregates from Mälaren to Stockholm, (b) a business project on liquid fuels logistics between Gothenburg, Lysekil and Karlstad and (c) construction of a new container port Stockholm Norvik, which entailed the need for extending the classification of inland waterway zones in coastlines in Göteborg–Brofjorden and Port of Norvik–Lake Mälaren areas. Other challenges for inland navigation, along with higher costs, were the need for promoting inland navigation, developing the regulatory basis and a establishing a coordinated development plan for the sector.

Ms. Pauwelyn presented projects for inland waterways in Flanders (Belgium) aimed at introducing innovations, improving the competitiveness of the sector and increasing modal shift from road to waterways:

(a) Pallet Shuttle Barges project by Blue Line Logistics – new vessels of a catamaran type with a length of 50 m, intended for transportation of cargoes on the deck in pallets, big bags and containers; their
advantages such as a safe short loading and unloading process, smaller size, a reduced crew and lower operational costs make the vessels competitive to road transport;

(b) project Hull-to-Hull (H2H), started in 2017, aimed at safe navigation of vessels and objects which are in close proximity of each other. The hull-to-hull positioning between two vessels or between the shore and the vessel test area is based on Galileo, EGNOS and other positioning methods. In Belgium, tests were planned by Blue Line Logistics on a remote-controlled vessel, and by the University of Leuven;

(c) Watertruck+, a modular concept of smaller pushed barge convoys which allowed to increase the range, capacity and operational flexibility and was applicable also on a network of small waterways; this was demonstrated on a video, and
(d) unmanned shipping technologies developed by SEAFAR to remotely operate automated inland barges; the tests will be started in September 2019.

Source: Documents of the 55th Session SC.3/WP.3 of UNECE 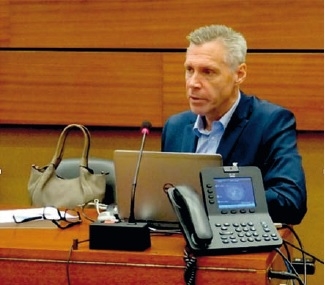