Enhancing inland navigation is essential to cope with constantly growing transport volumes within the Baltic Sea Region and Europe in a sustainable way. Inland navigation must be further developed as an integral part of a multimodal and sustainable transport system which takes advantage of digitalization and automation. This requires investments, innovations and intensive transnational co-operation, since 75 % of inland navigation operations are cross-border.

The will for co-operation seemed to be strong among the 130 participants, who had gathered at the Annual Joint Conference of the Interreg BSR Programme Project EMMA and the Chamber Union Elbe-Oder. The conference was held at the Nordic Embassies in Berlin and was opened by Per Thöresson, Ambassador of the Swedish Embassy in Berlin.

Conference speeches and panels elaborated the perspectives for inland navigation and river-sea-shipping markets. In his keynote speech, Kurt Bodewig, European Coordinator for the Baltic-Adriatic Core Network Corridor TEN-T and Mandate Innovative Financing Instruments at DG MOVE, emphasized the importance of inland navigation for a sustainable transport system in the Baltic Sea Region and Europe.

The functional hinterland system requires inland waterways, because the growing transport volumes cannot be coped only with road and rail facilities. Ingo Egloff, CEO at Port of Hamburg Marketing, a lead partner of Project EMMA, reminded that rail and road transport operate in their capacity limits. Increasing the modal share of inland navigation reduces congestion on roads and rails: as an example, a convoy of four barges equals the capacity of 440 trucks on the road.

Decarbonizing Europe’s transport sector is indispensable, since it is currently responsible for one quarter of the total emissions in the EU. The role of sustainable modes of transport must be increased, as the European Union aims for carbon-free city logistics and shifting 30% of road freight to more sustainable rail and inland waterborne transport by 2030. Making the most of inland navigation also provides economic opportunities and creates jobs in the region.

Infrastructural investments and innovations are crucial to enhance inland navigation. 40 000 kilometers of navigable waterways and over 200 inland ports connect major cities and towns across the European Union, and investments must be made both in waterways and in ports. Inland shipping and ports have a chance to be at the forefront of digitalization and automation. Digitalization increases safety and optimizes transport chains, which makes inland shipping even more efficient mode of transport. Furthermore, autonomous sailing is also an area where a lot can be achieved in the future.

Financial support is needed to implement new innovations in the market. The EMMA partners are investigating, for instance, how an inland motor barge based on European standards can be modified for navigation in Sweden under winter conditions. The study and development of ice navigation for inland barges, accomplished together with the EMMA partner Avatar Logistics and the Royal Institute of Technology, was published at the annual conference and is an important step to establish inland navigation in Sweden and in the BSR Region.

More Information, pictures and presentation can be found on EMMA webpage under Media Library/ Event Documentation.

“Barge performance under ice condition” report can be found on EMMA webpage under Media Library. 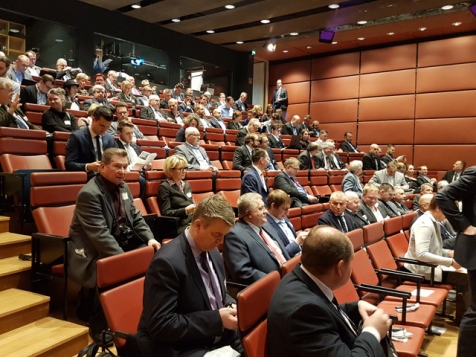