New locks found their way into the 2018-2029 national infrastructure plan in Sweden.

The Swedish Transport Administration presented recently its outline of the Swedish infrastructure investments for years 2018 – 2029, which included very positive news for the future of IWW transport in Sweden. The Swedish Maritime Administration, as responsible for fairways and locks in Sweden, has for several years argued that for safety reasons the hundred-year-old locks in Trollhättan on the Göta River cannot technically be kept operational beyond 2030. This has resulted in intense discussions about the construction of four to six new locks along the Göta River, from Gothenburg, the largest port in Scandinavia, up to Lake Vänern, the largest Lake in Sweden. The lake is located 44 meters above the 80 kilometres distant sea level, which the canal compensates.

With the inclusion of building new, probably bigger, locks along the river, the nervous wait for a decision is largely over for the dependent communities and industries in the surroundings of Lake Vänern. This decision is strongly in support of the purpose of project EMMA and important for several EMMA partner organizations. The plan includes the building of a new passage south of the current one, which holds four locks in Trollhättan, and replacing these with three bigger and higher locks. In addition, there will be a probable lengthening and widening of the other two locks in their current locations. The estimated costs for the project has been set to SEK 3.8 bn (app. EUR 420 million), which in the last CBA done, show a clear positive societal value. The full funding for all measures in the project has not been included in the plan, as the project will stretch into the next plan period beyond 2029. However, the suggested plan will now be open for public consultations until the end of October, and its final version will be presented to the Swedish Parliament for confirmation by spring 2018. Theoretically, the decision to build will therefore not be confirmed for another six months. Despite this, the likelihood that the project will not be included in the final version of the plan is judged to be minimal.

These recent news are very positive for the future use of the river for shipping, contrary to the decision by the city of Gothenburg six months earlier to build a new low bridge across the river. The clearance under the present bridge is 19 meter, which will be limited to 12 meters with the new bridge. In addition, the new bridge will not be opened during three morning hours and evening rush-hours. As many ships have had their height adjusted to pass under the current bridge, a lower bridge will see many more openings - especially so as 12-meter masts on leisure sailing boats are frequent in the area. In its decision to allow the construction of the bridge as requested by the city, the Land and Environmental Court required the city to introduce a traffic management system for the river. The work related to its development has still to start. However, the now available Sea Traffic Management system (STM), being in its later stages of development and introduced in a large number of European ports and on board of 300 ships, appears highly fit to fill the needs with only minor adaptations.

With a history of near 280 years of shipping past the waterfall in Trollhättan using locks, a future generation of locks will be the fifth generation of locks in Trollhättan. The passage where all the previous flights of locks are still intact form a monument of infrastructure history that is unique in the world. The shipping of sawn wood and zinc ore on the canal has as long history as the canal itself. Together with the import of pulp wood, which is the most important product today, the two are expected to remain important volume products also in the future. At the same time, in line with what was the intention of the adaptation of the Swedish IWW legislation, new innovative transport solutions are expected to emerge on the full length of the river and on Lake Vänern. Especially so as the investment decision in new locks has removed one of the major stumbling blocks for the future of the Swedish IWW. In addition, in its latest budget proposal, the government included another positive factor for IWW, namely a mission for the Transport Agency to investigate the possibility to widen the IWW zones in Sweden to allow vessels to operate in larger areas than today - something that has been long argued for by EMMA as well as the shipowners.

Have a look at the waterfall that must be overcome by the locks in Trollhättan:

The whole, beautiful, 80 kilometres long voyage upstream from Gothenburg passing all six locks in the Göta River can here (https://www.youtube.com/watch?v=SgG3RECRWYQ) be done in just four minutes instead of about eight hours a normal cargo ship will need to reach Lake Vänern. 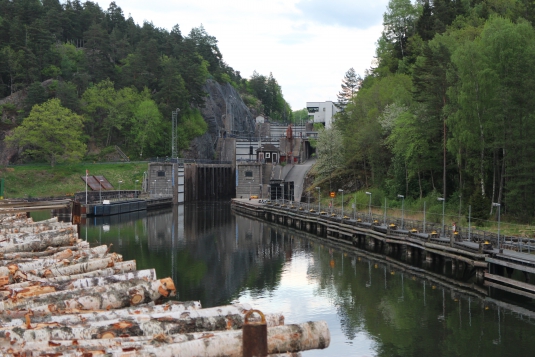