For several reasons, IWT is not considered as an alternative to road and rail transportation by all industries and companies. This has to do with general transport requirements like transport times or volumes as well as individual logistic processes on the industrial area. Also limited knowledge about IWT and its integration into international transport chains play a role. IWT is seen as too complicated and too risky. In consequence IWT does not exploit its full potential.

The EMMA project aims at enhancing inland navigation in the BSR. In WP 4 the partners are working together to make the market more acquainted with the potentials of IWT in the BSR. The aim of EMMA activity 4.2 is to identify companies, who have the potential to move cargo from road or rail to inland waterways and together with them, set-up new IWT transport chains. The report on hand summarizes the individual steps and gives an overview about IWT affine industries in the BSR, customer needs and estimated volumes. Identified potential new IWT services will be sketched.

For having a real potential to move cargo from road/rail to IWT, companies should be located in the catchment area of a river (about 50 km distance maximum). For this activity the term “companies” is not limited to headquarters. A company might be located away from the water, but have storage facilities at the waterfront and thus might be a potential customer.

The EMMA project covers partners from Finland, Germany, Lithuania, Poland and Sweden. In the project preparation phase, these countries appeared as those having the highest potential in developing sustainable and effective IWT structures in the BSR. In this activity, the partners focused on certain areas of these countries, based on main rivers and the area covered by the Interreg Baltic Sea Region Programme. The report is based on the input of EMMA and their cooperation with the industry. Based on the importance of IWT and the development level, the input received slightly differs. Focus topics, structure and answers have to be considered in the light of this background. 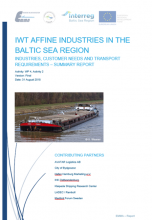