The Kujawsko-Pomorskie region is a special place in the Polish waterway system, because it is the place where two International Waterways E 40 and E 70 intersect.

The local government of the voivodship for many years has taken a number of actions and ventures towards the revitalization of waterways and restoring them to the proper role in the country’s transport system. One of them was the accession, together with the City of Bydgoszcz, to the international project "Increasing mobility of goods and logistics in the Baltic Sea Region by strengthening inland and maritime transport and promoting new international shipping services" - acronym - EMMA, which brings together 21 partners from five Baltic countries.
One of the tasks carried out under the project was a promotional and research pilot container cruise on Vistula River from sea ports into the country to Tczew, Grudziadz, Bydgoszcz, Solec Kujawski, Toruń, Włocławek, Plock, Nowy Dwór Mazowiecki and Warsaw. The aim of this task was to identify navigational difficulties on the Vistula waterway, which in the present navigational conditions, an operator needs to measure, transporting goods from seaports into the country and an increase in awareness of the need to include inland navigation into the country's transport system. The cruise was carried out on 19-27 April 2017 and, in addition to the above, the study of the shipping route on the section Gdansk-Warsaw, which depicts the current state of the lower Vistula, will help in identifying the most rational solution for its full re-opening and locating in the region a multimodal platform based on water transport.

Find out more in the report... 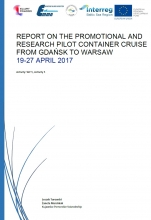