Mrs Monika Niemiec-Butryn represented the Ministry of Maritime Economy and Inland Navigation of Poland during the EMMA conference in Berlin.

She promoted plans for the development of the inland waterway sector in Poland. One of the goals of he Ministry of Maritime Economy and Inland Navigation participation in the conference was to intensify contacts with the German administration responsible for the development of the transport system in the area of ​​the lower Oder. During the conversation between MGMiŻŚ representatives and the Minister of Infrastructure and Spatial Planning of Brandenburg Katrin Schneider, the will to cooperate in the scope of including the Szczecin-Berlin section into the TEN-T transport corridor was confirmed. Current working contacts in this matter will be maintained at the level of department directors.

The conference was held in the Nordic Embassies in Berlin, Germany with the participation of about120 people representing business, science and administration in the EU countries as well as in other European institutions. 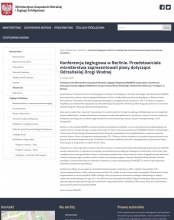